Black History is American History, and that is why we will celebrate and elevate the contributions of African Americans throughout the year, not just during February, Black History Month. The newly formed Diversity, Equity and Inclusion (DE&I) Committee aims to increase the awareness of diverse and underrepresented industry-related experts and contributors from all backgrounds while amplifying their voices. By doing so, we believe we can help create a more aware, informed and inclusive community within our Chapter where everyone feels as though they belong. Subsequently, we’ll all achieve a better understanding of the value, contributions and lived experiences of all of the practitioners in our industry.

We want to hear about and elevate living icons throughout the year. In the spirit of crowdsourcing, email Betsy Helgager Hughes if you would like to recommend a first, a past or present PR icon for consideration.

“Always be thorough and honest with your clients and try your best to develop personal relationships with them.”

Inez Yeargan Kaiser was the founder of the oldest African American, female-owned PR firm in the country – Kansas City-based Inez Kaiser & Associates (1957) – during an era when it wasn’t popular for women to own a business, let alone a Black woman. She was also the first African-American woman to head an agency with national clients, most notably 7Up in 1960. Additionally, she was the first Black member to join PRSA, and the first Black woman to join the Greater Kansas City Chamber of Commerce. 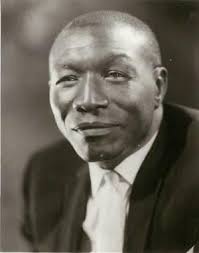 Joseph Baker was a PR industry pioneer in a lot of ways. Most notably, he was the first Black owner of a public relations firm in the United States – Joseph V. Baker & Associates, founded in 1934. He practiced his craft with a purpose and was ahead of his time in the industry in terms of encouraging and influencing corporations to be inclusive during the Jim Crow era.

Baker was the inventor of modern-day multicultural PR and marketing, helping corporations and organizations market specifically to Black Americans. He convinced companies to feature Black Americans in advertising and hire Black workers to generate brand loyalty. He reviewed scripts for NBC to ensure shows wouldn’t be offensive to Black viewers, and he helped increase the number of African Americans appearing on the network in non-stereotypical roles. He also achieved a lot of firsts. He was the first Black president of Philadelphia PRSA, the first African American to be accredited by PRSA, and the first African American writer for the Philadelphia Inquirer.

If being a Black pioneer in public relations wasn’t enough, he also had a different ability – he was born with one leg longer than the other and used a crutch. Baker didn’t let anything get in the way of his success and made it a priority to make a difference in the inclusion and portrayal of African Americans in various mediums. 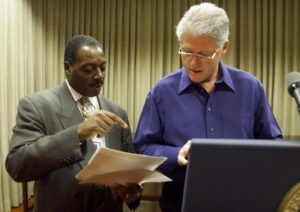 There’s nothing more behind the scenes in communications than a speech writer. Black presidential speechwriters were invisible until 1995 because they were non-existent. Meet Terry Edmonds, the man behind the curtain with a mastery of words. He joined Bill Clinton’s staff in 1995 and eventually became director of speechwriting where he served until 2001, making him the first ever Black speechwriter for a United States President. His career in PR began in 1978 where he served as a public relations specialist for the Maryland Transit Administration. Edmonds earned a B.A. in English from Morgan State University in 1973 and wanted to be a journalist, but that career wasn’t as accessible in the 70s. “So, I veered into public relations as a career choice. As a public relations writer, you do a lot of ghostwriting; you don’t get a lot of credit for the things you write. It was kind of a natural training ground for speechwriting,” Edmonds says.

Learn more about Terry Edmonds and hear from him in his own words here. 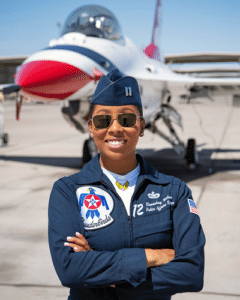 Captain Remoshay Nelson made history as the first Black, female officer in the United States Air Force Thunderbirds. The Atlanta area native and Howard University graduate is the Public Affairs Officer for the Air Demonstration Squadron, managing the team’s marketing and publicity initiatives.

Before joining the Thunderbirds, Captain Nelson held multiple media operations assignments throughout Europe and served as the Chief of Public Affairs at the Kunsan Air Base in the Republic of Korea. During the first few months of the COVID-19 crisis, and her first season as Thunderbird Number 12, Nelson participated in a joint flyover with the U.S. Navy Blue Angels honoring Atlanta’s medical heroes.

Captain Nelson’s accomplishments in military communications and historic acceptance into the elite demonstration team led to her receiving the key to Douglasville, Georgia, her hometown, in a recognition ceremony last November.

“I know a small percentage of African-American officers, specifically female officers in the Air Force. So to be in a position that is visible, to show little girls that this is attainable, to let them know they can do anything they put their mind to, is an absolute honor,” Nelson said.

To read more about Capt. Nelson, go here, and you can find an interview with her here.