It’s Women’s History Month, and PRSA Georgia salutes all of the incredible women communicators who are either firsts and/or have used their talents and viewpoints to create new experiences, ideas, and positively enhance the perception of women in various industries, enabling all of us to see the world in new and different ways. Here are a few examples. 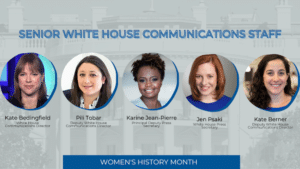 Who Runs the White House Press Corps? Women! Back in December 2020, after winning the presidential election, President Joe Biden announced that he was bringing in an all-woman team of communicators to run his administration’s communications office. This marks the first time any presidential administration had such a team.

These communicators’ collective experience in the political/public service communications arena is impressive and offers an overview of diverse cultural and political backgrounds and expertise.

Another first among the dynamic communications team is Symone Sanders. Symone is now the first-ever Black woman to hold the press secretary title working with Vice President Kamala Harris. Previously, at the age of 25, Symone served as Bernie Sanders National Press Secretary, making her the youngest to ever hold that title, and then went on to serve as a senior advisor to president-elect Joe Biden in 2020.

The task of providing thoughtful, honest, transparent and meaningful communications to the American people daily on behalf of the White House is undoubtedly a challenge, but this all-woman group has made it their mission and is more than capable of delivering on the promise. They will serve as role models for future communicators, men and women, for generations to come. 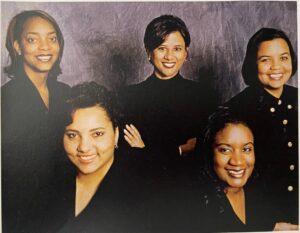 One of the most impressive stories is close to home, with roots within our organization.

At the time, Ketchum had received numerous requests from companies wanting to target the growing demographic and responded by enlisting a group of impressive women, that included Betsy Helgager (Hughes), Kanata Herring, Nichole Taylor, Hillary Sterling (John), and Alexis Davis (Smith). Though based out of Atlanta, the group served the Ketchum network, working for clients like Mahogany and Hallmark Cards Inc., Johnson & Johnson, The Coca-Cola Company and P&G. The announcement was widely covered, garnering stories in publications like PRWeek, O’dwyer’s, The Holmes Report, Black Enterprise, The Atlanta Daily World and the Atlanta Journal-Constitution.

Many years later, the group is still as tight as ever, bonded by their shared experience designing award-winning programs as well as the challenge of being pioneers. All are graduates of historically black colleges (HBCUs) and have continued to thrive in the industry.

Where are they now? Three of the five original members have since launched successful PR firms. Alexis was the first to strike out on her own, starting an award-winning firm, PRecise Communications, in 2000, followed by Betsy, who launched BLH Consulting, Inc. in 2002, and then Nichole, who founded Taylor Communications Group in 2008 after owning Duffey Communications for three years prior. Kanata provides marketing and communications in the spirits industry, crafting a successful career, while Hillary uses her communications skills to support a major retirement organization’s foundation. Deisha Galberth Barnett of Metro Atlanta Chamber fame became a valuable member of the group after the launch. Alexis is the membership chair of the PRSA’s Counselors Academy, and Betsy serves as co-chair of the PRSA Georgia’s Diversity, Equity & Inclusion committee; both are longtime members of PRSA Georgia.

A picture is worth 1,000 words, but words are valuable too, especially those that count everyone in and nobody out! Words can shape the way people are treated, can be used to open doors when they are gender-inclusive and can create barriers when they are not.

As we further acknowledge and respect the pronouns with which people wish to be identified, being gender-inclusive benefits everyone. Here’s a language tip to encourage gender inclusivity in your writing.

TIP: Avoid using the generic he/his when referring to all people. Try changing “he” to “one” or “the individual.” Try making the sentence plural. Change his to “the,” or use “they” as a singular pronoun.

Can you deliver your messages without appearing to be gender-biased?

Inspired by the Ontario Women’s Directorate, “Words That Count Women In.”